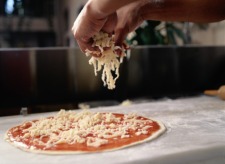 Pizza is one of the most popular foods in America, whether it is a frozen pizza, dollar slice, fast food or from your favorite pizzeria. You would think that we know everything about this magical combination of bread, cheese and sauce that we all love oh so much, but here are some facts that you probably did not know!

1) There is an organization that verifies ‘True’ Neapolitan Pizza around the world. Founded in 1984, the Associazione Verace Pizza Nepoletana has set specific rules that must be followed if a pizzeria is going to be called authentic Neapolitan!

2) The word pizza originated from the Ancient Greek Words pikte (“fermented pastry”) and pitta (“bran bread”), the Italian word pizzicare (meaning “to pluck” as in “plucking quickly from the oven”). Also the Old High German word pizzo (“mouthful”), brought to Italy in the sixth century by the Lombards.

3) Tomatoes weren’t always a crucial component as they were not brought back from the New World until the 1500’s and eventually made their way onto pizzas and became an essential component of the pies we know today.

4) The outer edge that we call the crust is actually called the “Cornicione”.

5) You won’t find pizza slices in Italy. They only serve whole (smallish) pies or cut into squares or rectangles called “pizza al taglio”.

7) There are more regional variations of pizza then you think. Such as Chicago deep dish style, Detroit square style, or New Haven thin crust style.

8) The world’s largest pizza was nearly 123 feet across according to the Guinness book of world records.

10)  Papa’s Tomato Pies, which was founded by Giuseppe Papa in 1912 on South Clinton Avenue in Trenton, New Jersey, has operated continuously since opening day and is still owned and operated by the Papa family.

The Best Beverages to Pair with Your Pizza

It’s no secret that Italian cooking is a favorite among many. But with so many…

Mother’s Day is right around the corner on Sunday, May 13. You love your mom…