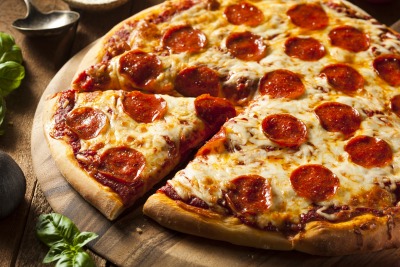 Pizza is one of the most popular foods in America, and has been around for a long time. The predecessor of pizza was flat bread that was known to the Romans as “panis focacius”. The modern pizza we know today was developed in Naples after a tomato paste was added to the flat bread in the late 18th century.

The word “pizza” was first originated in Gaeta and in different parts of Central and Southern Italy.

Going back centuries when pizza was first created most Italians thought of pizza as a peasant meal. Pizza was mostly eaten in Italy by emigrants. After World War II, troops that were allied with Italy came to enjoy pizza along with other Italian foods.

This year was the opening of the world’s first Pizzeria in Italy. The name of the pizzeria is Port’Alba, the pizzas were cooked in an oven lined with lava from Mount Vesuvius, a volcano located on the Bay of Naples.

Pizza finally traveled across the big pond and made its first appearance in the United States with the arrival of the Italian immigrants in the late 19th century. New York City, Chicago, Philadelphia, and St. Louis were some of the first major cities in the U.S. to be introduced to the pizza that we know and love today!

Is all this history making you hungry? Check out Fazio’s menu and grab a slice of history today! https://faziosvilla.com/menus/

The Best Beverages to Pair with Your Pizza

It’s no secret that Italian cooking is a favorite among many. But with so many…

Mother’s Day is right around the corner on Sunday, May 13. You love your mom…